The following article was written by guest contributor Justin Stocking: 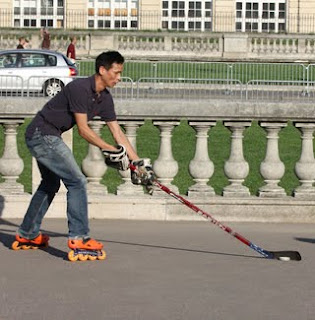 Found in the back streets of neighborhoods, parking lots of church houses, tennis courts or drive ways, are people joined together by the sheer joy of competition. Strapped to their feet you’ll find a six dollar pair of inline skates found from their local Salvation Army, a pair of skates that have been kickin’ around in the garage for the past couple of years, or on rare occasion, you may even find the person that dropped a few extra bucks for skates at a sporting goods store. This sport, this passion, this joy they all share, is for a sport they call Street Hockey.

Street hockey’s rules originate from the more familiar sport of ice hockey. Ice hockey is played with a rubber puck, and since it is played on ice, the puck slides easily across the surface when passed from player to player. When you transfer your playing surface to something other than flat ie: asphalt, the simple task of passing the puck back and forth becomes “friction filled.” So for street hockey, instead of using a five and a half to six ounce rubber puck, a hollow, three inch diameter hollow hard plastic ball is used. On some occasions a puck may be used, but these pucks differ from the ones of ice hockey have specially designed wheels or pads on top and bottom, so no matter what side ends “up” the puck will glide smoothly from place to place. I have found that a ball works better for control over that of a puck.

Ice hockey is usually played indoors in organized leagues, although those who live in colder climates up north may be familiar with the pick-up style of the street. Frozen ponds and makeshift rinks can sometimes provide the terrain necessary to play; provided the temperature stays below freezing. An ice hockey team consists of five players and a goalie per side. Each player is armed with a stick and if you look, you will notice that each of them have the bottom of the stick taped in order to give better grip to the puck as it comes to them. Each member of the team has their armor consisting of a helmet, shoulder and chest pads, elbow pads, gloves, specially designed pants with hip and butt pads, knee pads, shin pads, and long socks to go over the shin pads. You would think that’s a lot of protection, but all these pads are necessary because ice hockey is intended to be a full contact sport.

When playing ice hockey, there are two goals, each intended for the teams to guard and be scored on by the opposing team. Ice hockey can be a fairly expensive sport to get into after purchasing all the pads, you have to organize teams, set playing dates and usually traveling is involved if having serious competition is your intention. The advantage to joining a paid league is that you can pretty much always count on there being enough players to play, contrary to street hockey where the numbers can really vary.

Street hockey is played on cement, or asphalt. Unlike ice hockey, three to four players and an (optional) goalie are the norm. The sticks are purchased according to wallet size, or personal preference, but if you look closely at a street hockey player’s stick you will notice that the bottom is usually not taped, this allows the ball to roll along the ground, and not be slowed down by the friction caused by the tape. Not as many pads are necessary for street hockey, although they are highly recommended. Usually shin pads and gloves are the things worn by many playing in my games. I was able to find my skates for under $10 at the second hand store, and my gloves and shin pads were found in the basement from years ago.

Although some street hockey players run around on shoes, inline skates more effectively simulate skating on the ice, and the game usually moves at a faster pace. Instead of having to pay dues and organize teams to play with, street hockey is free as long as you find a place to play, and people to play with. Rules are basic with street hockey: There is no icing or off-sides. Full contact is discouraged, but if the game depends on you knocking someone over or tripping them up, others are understanding of this need, and the game goes on.

If you have never played hockey before, I encourage you to give it a try. The rules are basic and easy to learn, all you need is some competitiveness and a willingness to get pushed to the ground a few times. So find a group near you and come enjoy the adrenaline rush.

If you’ve never witnessed a game a street hockey, check out this scene from the 1993 movie Airborne: