What Girls Should Know Before Joining a Men’s Team 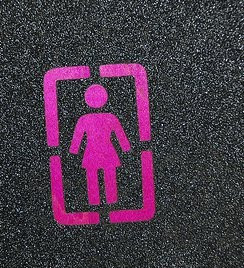 If you’re a girl who likes to play hockey chances are you’ve found yourself surrounded by guys at one point. Like other contact sports, hockey tends to attract more males than females, so if you haven’t experienced being a minority yet, you probably will. Although most guys will tolerate playing with a woman, it will make some uncomfortable. Here are some tips, written from the male perspective, on things you can do to ease the awkwardness.  Hopefully, this will provide insight into what men are thinking when you request to play on their team.

Men and Women Have Physical Differences

Even young Joesph in Kindergarten Cop knew women and men are biologically different.  One major difference is testosterone, a natural hormone that literally gives men a competitive edge in sports.  This isn’t to say that some girls are stronger and more athletic than some boys…but generally speaking men’s bodies are better equipped to handle physical exertion. Just because you may be the exception to the rule doesn’t mean the guys will all of a sudden embrace your desire to participate with them. Demand to be treated with fairness, but not like “one of the guys”. While it is probably unrealistic to expect them to forget the fact that you are a girl, you can let your game speak for itself.  Doing this will shift the focus from you being a woman that’s a teammate to a teammate that’s a woman.

Expect at Least One Guy to Go Easy

Don’t be surprised if one of the participants holds back whenever you gain possession of the puck. He may not have experience playing with someone of the opposite gender so he may feel uncomfortable going full speed. His experience with women might not be related to sports and the only interactions he’s had may be ones of a more gentle, less competitive nature. Even if you explain to him that any incidental roughness is OK, he might still hold back. This can be a very real concern for a man, so just try your best to respect his perspective.

Expect at Least One Guy to Be Ruthless

It seems like there will always be some smug hotshot who seems to ask, “So you wanna play with the guys eh? I’ll show you!” He will then proceed to play in a manner more aggressive than perhaps even his teammates have seen in previous gameplay. The best way to deal with this is to encourage his other male teammates to remind him how ridiculous this makes him look. This is just how some men will react to something that makes them uncomfortable. If they can drive away the “problem” they won’t have to confront it anymore.

Don’t Make Excuses for Your Gender

When you play with the guys, you already stand out enough as it is, so avoid drawing further attention to that fact.  If you mess up, don’t say things like, “Still not too bad for a girl though, am I?” If you want to attach “for a girl” to your statements be prepared for a response indicating that there are leagues “for a girl”. Just play your best and if there are situations where an apology is appropriate, say sorry as a teammate not as a woman.

Don’t Boast Because of Your Gender

If you beat your male counterpart in a faceoff, deke him, or score on him…do not remind him he got beat by a girl. The male ego is sometimes too fragile to deal with this. You have to understand that defending against a girl in competitive sports can be a lose-lose situation. If he plays too aggressive others may razz him for being too gung ho.  Go too soft and he gets teased for losing to a woman. No need to remind him of the tough spot he may feel like he’s in.

If you are female and play in a men’s league, chances are you won’t share a locker room with the male members of your team. Believe it or not the locker room is a good place for members of a team to fraternize, discuss pregrame strategies, and evaluate postgame performance. If you are a woman, you will miss these important conversations, so make sure you are up to speed on what they talked about so you can work together more effectively.