Can a Horoscope Predict Your Future Hockey Success?

Do you believe in superstition? Here’s what my horoscope said today:

Your communication style is especially effective today, so make sure that you’re on the horn or broadcasting your message in some other way. People are sure to be listening carefully and liking what they hear.

As a Taurus, how could I resist hitting the keyboard after reading something like that? Skeptics out there would argue that birth month has absolutely nothing with determining my future success; as an author on a blog, as a hockey player, or otherwise. What do you think? 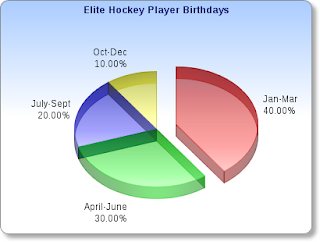 I hope you didn’t answer to quickly. What if I told you that when it comes to highly competitive Canadian hockey, 40% of the players will have a birthday between January and March. Let me say that again in a different way: 4 out of the 10 hockey players will have been born in the first quarter of the year. (Roger Barnsley made this discovery in the 80’s and this was pointed out to me in the book Outliers by Malcom Gladwell)

What the??? Get this: Only a measly 10% will celebrate a birthday from October through December. Does this mean Scorpio’s just suck at hockey? The answer actually has nothing to do with astrology, zodiac signs, or voodoo.

As Gladwell observes in Outliers, the cuttoff for most, if not all, Canadian youth hockey leagues is January first. Coaches begin to sort the good from the great at an early age, around 9 years old, usually. Players born closer to the beginning of the year are often more developed, physically and mentally. Two players sharing the ice could be 11 months apart, a very large gap when you are dealing with 4th graders. Do you think this plays a role in the selection process? Of course! The players who do make the cut play on better teams, are taught by more experienced coaches, get more ice time, and on and on. In short, the “good” get better.

Well, that sounds a little depressing doesn’t it. Especially for those of you born around December. It’s bad enough to have a birthday so close to Christmas, and now this! What can those of us who aren’t good enough to make it to the NHL learn from this?

The take home message, for me at least, is that often times opportunities are just as important, if not more important, than talent. So if you see an opportunity you better seize it.

Later on in the book, Gladwell observes that becoming an expert in any field–hockey, computer programming, or playing musical instrument–requires hard work in the form of practice, about 10,000 hours to be exact. There’s a saying that luck is what happens when opportunity meets preparation. Will you be ready? Thumbnail image by Nekenasoa