The Crease in Hockey: What is It? 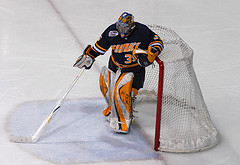 If you’re new to the game, you may have seen the blue half-circle in front of the goal and wondered what it’s for. This is the crease–you can think of it as the goalie’s turf. Players aren’t allowed in this area until the puck enters it, either from a deflected shot or from being carried in. If you grew up playing on the pond or the street and you are just joining a league, be sure to familiarize yourself with this rule.

The Three Most Confusing Hockey Violations