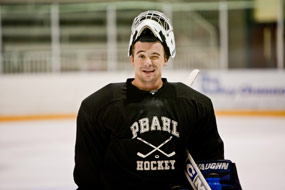 With less than three minutes to go in the third we evened out the score at 1 to 1. The score remained the same until the clock had four zeros across it.

Reset to five minutes we took to the ice for a sudden death overtime. Although both teams were fatigued, we dug deep and fought hard but it ended a stalemate. A good old-fashion shootout would determine the winner. Three shooters were to be selected, each with an opportunity to become a beer league legend. Our team had the choice of who would shoot first. We chose our opponents.

The first shot was blocked. Our turn.

Our attempt was unsuccessful. And so it went until the three shooters from each side was exhausted. As the officials congregated to discuss what was to happen next, the opposing goalie took to center ice and began toying with the puck. With his back to the goalie, the ref informed us we would go back and forth until someone scored. The three original shooters would not be brought back into the rotation until everyone else had a chance. At that moment the opposing goalie, still at center ice, had an appearance of eagerness instead of boredom. Did he really think he was going to be the next shooter? The refs looked at one another with a “Should we let this fly?” look. Reading their minds, one of my teammates waved his hands in protest shouting, “Goalie can’t cross center ice”

And so it was decided. What could we do except shrug and laugh?

Just as the opposing goalie began his approach, the guy in the stripes informed him he had to keep his glove on. The tender picked up his glove and started towards the net. As he got closer it looked like he fumbled the puck because he had to kick it back up to his stick. Our goalie closed the lane on him and he never got a good look at the net.

I figured I would go next, but then our goalie left his net and headed towards the red line. How could I deny him. He appeared confident. Could this be the game?

We waited in silence as he skated toward the goal opposite our bench. As he entered shooting range he dipped his shoulder, throwing a fake. The opposing goalie bought it, and lowered himself to block the shot. Seizing the opportunity, our goalie roofed it. Top shelf. Where mama keeps the peanut butter. It was beautiful. I wasn’t even sure that could be done with a goalie stick until I witnessed it myself. History was made. Ask any of the 12 fans who were in the bleachers, they’ll tell you they’ve never seen anything like it.