Here at SchoolyardPuck.com we are always looking for products that will improve our game. Today we are taking a look at the Green Biscuit. The official product description reads:

The Green Biscuit is an off-ice training hockey puck that will help you, and your team, develop better stick handling skills… [it] is not designed for shooting. It’s a stick handling and passing puck. 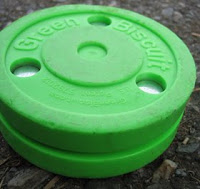 You might ask yourself, “Why would anyone want a puck they couldn’t play a game with?” The answer: to develop and improve stickhandling, as well as making and receiving passes. As a player gets a better feel for the puck on the end of his stick he will be able to dribble it with his head up. If his head is up he will be able to make passes to his teammates. As it has been said before, the puck is always the fastest moving object on the ice. A team that can make solid passes will always outplay the team who relies on skating ability alone.

How Does the Green Biscuit Perform?

On rougher concrete and asphalt surfaces, I have never seen a better performing puck. We first introduced the Green Biscuit to the tennis courts and could not believe how far it soared. It easily spanned the width of three courts. When compared against an IDS puck (the official puck of many roller hockey leagues) the Green Biscuit prevailed. Misdirected by small bits of sand, gravel, and rough edges, the IDS puck slowed while the Biscuit seemed unfazed by these obstacles. As any roller hockey player knows, one of the most frustrating occurrences is when a puck doesn’t stay flat, but rather turns on its side and rolls. Even on an asphalt parking lot the Green Biscuit stays down like a well-trained dog greeting a visitor. When surfaces are too rough for other pucks, often a hockey ball is substituted for a puck. While this may be a good solution for a pickup game of street hockey, it will not simulate the feeling of playing with an ice hockey puck like the Green Biscuit will. The GB claims to act “just like the real thing does on ice” and while this may be somewhat of an exaggeration, it really is a good puck. On smooth surfaces (think concrete garage or competitive playing surface) the differences between the GB and the IDS puck were negligible. This came as no surprise to me because this is the turf the IDS puck calls home. That’s what it was made for. One advantage the GB has on a smooth surface is its weight. It weighs almost a full ounce more than the IDS puck. The chart below shows the weight of each item.

Why Can’t I Just Use the Green Biscuit to Play a Game of Street Hockey?

I don’t believe it makes a very good shooting puck and, although I couldn’t find any information on the website, here’s why: First, the puck is constructed from two pieces of solid plastic fastened together by steel bars resembling bolts. I tried a few wrist shots and the Green Biscuit didn’t have the same “Frisbee” effect a standard puck did. I believe the reason it doesn’t fly like a standard puck is because of the airflow through the middle. Next, I don’t think the puck is designed to withstand the blast of a hard slap shot. Finally, the puck is heavier than most street hockey pucks and most pickup hockey players aren’t fully dressed in gear. The Green Biscuit could do some serious damage if it connected hard.

If you are looking to improve your handling and passing skills, and you want to open up your options for the type of playing surface, at $15 MSRP you would not regret your purchase. If you are looking for a puck to play street hockey with your buddies in an empty parking lot, the classic orange ball will probably best suit your needs.

For more information about The Green Biscuit or to purchase it, visit their official website: GreenBiscuit.com