Stopping A Breakaway When Tending the Goal 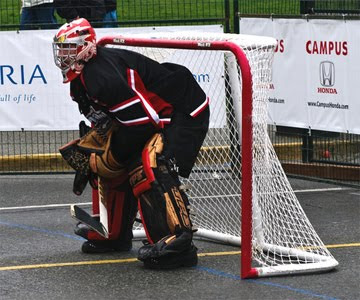 Often times in a pick-up game you will find yourself having to protect the net. This put you in a tough situation, especially if you aren’t used to playing goalie regularly. Because positions aren’t usually clearly defined a scramble for the puck can lead to a breakaway. What should you do when find yourself confronted with a one-on-one situation? Stoppucks.com author cautions against watching the shooter’s eyes because they can be deceiving. Instead keep an eye on the stick:

The key to reading the shooter is seeing where the shooter is holding his or her stick. If their stick is out in front of them it usually means they are going to deke, its pretty hard to get off a good shot if [the shooter is] holding the puck in front of [him], so if you see that the shooter pulls the puck back to the side of their body it is likely that they are planning to shoot.

If you compete with the same players regularly you can use what you know about their skill levels do your advantage. Can the shooter aim the shot exactly where he wants it to go? How are his stick handling skills? How about skating? Can he stop or reverse directions easily? Studying your opponent’s abilities can help you be a better goaltender because you can influence him to use his weaker skill. A follow-up post tells you how to do this.

As you cover the net more you will learn more about your own reaction time, flexibly, and how to close the gap at an even pace.

How Goalies Can Read A Shooter On a Breakaway [StopPucks]