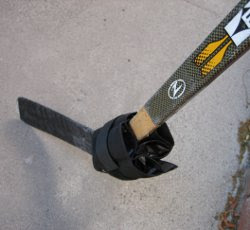 The other day, while browsing the junk bin at my local thrift store I came across a pair of ankle weights. Lying between neon-green knee pads and mismatching dumbbells, they were almost overlooked.  At $4, the price was right. I bought them because I have seen others add weight to the end of their stick for resistance training, so I thought they would work well for this application. Best part is, they are the kind that have small, removable sandbags so the weight can be adjusted accordingly.

Why Train with A Weighted Stick?

The concept of using a heavier object when training has been around for ages. Have you ever seen a baseball player swing two bats while on deck to hit? He does this so when he steps up to the plate, a single bat will feel almost weightless. A hockey stick can be very similar. When practicing shooting or stickhandling with a weighted stick, you are using the exact same muscles you would in a game, allowing you to strengthen the parts of your body that will make you a better player.  If used regularly, you should notice increased handling speed and a more powerful shot.

Jeremy from HowtoHockey.com put together an excellent list of weighted hockey stick drills you can incorporate into your training.